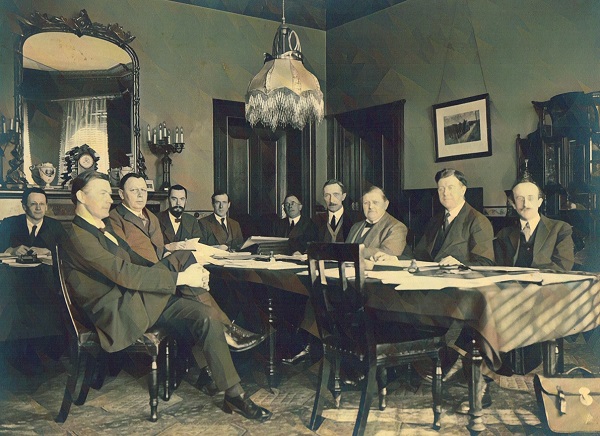 1922 Constitution Committee:- a dramatic re-enactment - Tonight at 7:30pm
Get Involved

As part of the National Archives and the Courts Service Decade of Centenaries joint Commemorations Programme, a very special and unique event will take place to mark the work of 1922 Constitution Committee.  A theatrical re-enactment of the proceedings of the 1922 Constitution Committee, commemorating the historic work of the Committee, will take place in the Constitution Room of the Shelbourne Hotel on 25 October 2022.  This event has been developed specifically to mark the centenary of the adoption of the Constitution of the Irish Free State (Bunreacht Shaorstáit Éireann) by Act of Dáil Éireann sitting as a constituent assembly on 25 October 1922.

Many might believe that the Irish constitution was created in 1937, but in early 1922 a Committee, chaired by Michael Collins, gathered to draft what became the country's first constitution. Under extreme time pressure, four solicitors, a writer, a Dublin businessman, an American lawyer and two professors drafted the Constitution of the Irish Free State 1922 which provided the framework for our modern day Constitution. They have largely been forgotten by history.

The Constitution that they drafted came into being in 1922. It set out very different parameters to those we might be familiar with today and was determined by a desire to establish, in the words of its Chairman, ‘a free democratic constitution’, an undertaking which Collins defined as ‘the most important task – more important than the Treaty itself’.

The papers of the Constitution Committee are held by the National Archives, Ireland’s official repository of State records. They sit alongside other complementary collections of early Dáil Éireann papers. Collectively, these records chart the most tumultuous and significant period in the Nation’s history, providing evidence of the decisions which determined the establishment of the State. The Constitution Committee holdings comprise its working papers, research, letters, minutes and various drafts.

“The passing of the Constitution of the Irish Free State (Bunreacht Shaorstáit Éireann) in 1922 marked an important step for the new Free State Government in 1922. I am delighted that the National Archives and Courts Service are staging this dramatic response to these papers and records. Re-enacting the work of the committee, situating the drama around the same table in the same room where the Constitution was developed is powerfully resonant and richly significant.”

Also speaking in advance of the event, the Chief Justice of Ireland, Donal O’Donnell said:

“There is nothing more prized among our newly won liberties than the liberty to construct a system of judiciary and an administration of law and justice according to the dictates of our needs and after a pattern of our own designing.” W.T. Cosgrave, President of the Free State’s Executive Council, wrote in January 1923.

As with so many of this year’s centenary commemorations, it is important we mark the work undertaken 100 years to build the country. The passing of the Irish Free State (Bunreacht Shaorstáit Éireann) Constitution in 1922 was an important part of the work to put in place those initial foundations including detailing the configuration of the new Irish Courts which commenced in 1924. Bringing to life the records of the Committee’s deliberations through drama is a great way to commemorate and make the work of the Committee and the enactment of the Constitution more accessible for people. We have been very fortunate to collaborate with the National Archives on this initiative”.

The event is supported by the Department of Tourism, Culture, Arts, Gaeltacht, Sport and Media under the Decade of Centenaries 2012-2023 Programme.

The 1922 Constitution Committee:  A Dramatic Re-enactment Presented by the National Archives & the Courts Service: Event Program

Link to the livestreamed event  which begins at 7.30pm.